Being the Observer : Spiritual Guidance Blog
1 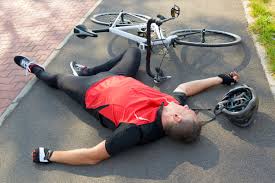 A couple of months ago I was cycling home from an evening coffee with a colleague I had not seen in many years. It was dark out by the time I started back home, so I had on my reflective vest and flashing lights on the front and back of my bicycle.

Less than 100 feet from my home, a cyclist coming in the other direction, suddenly cut across the street and abruptly veered toward me. To avoid a collision, I slammed on my breaks. I stopped too quickly, however. The momentum of my moving forward caused me to flip over my handlebars and crash to the pavement.

I remember at one moment I was aware that my feet were above my head. Time seemed to stop. I then felt myself hit the pavement and skid briefly. I remember hearing the bicycle crash and scrape the pavement. I remember hoping the bike was going to be okay.

I remember looking down the street. I saw the cyclist carrying on their way. It did not appear that they had slowed down at all. They certainly had not stopped. They didn’t even look back.

I quietly walked my bicycle home. Remember, I was less than 100 feet from my home. I remember feeling at peace. I also remember feeling rage. It was like there was an angel on one shoulder and a devil on the other. Except, the observer was watching both!

In the days that passed, I vacillated between rage and peace about the event. Eventually the experience melted away. But what has stayed with me is the memory of the observer. That observer is someone or something I intend to cultivate a relationship with.